Two years ago, I wouldn’t even ride the stationary bike at the gym. Cardio? That’s for skinny people, I was there for the gains and living the squat life. At work, though, Margaret kept taking about her Team Red, White & Blue running group. How they had even inspired her to do a half-marathon. We traveled for work a few times and she even made time for hours long runs while on the 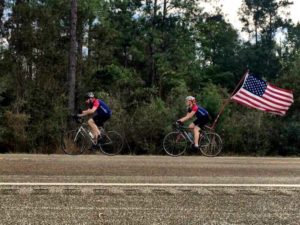 When it came time for the half-marathon, I made sure to be there to cheer her up Hospital Hill, a tough incline a lot of people walked up. Not only did I see her tackle that hill head on, I saw Andy Sampson and other Team RWB Eagles running up and down the hill over and over again alongside struggling Eagles. And I saw two amputees with the EOD Warrior Foundation handcycle up the hill. Okay, if Margaret can train through injuries and work travel and if those guys could get up Hospital Hill without legs, I didn’t really have any excuse not to do something.

So I bought a bike. On my way home from Margaret’s half-marathon. Then I started riding every Saturday morning with Team Red, White & Blue around Hains Point. In June 2015, I rode 12 miles with Team RWB and I met some wonderfully supportive people who encouraged me to keep riding, at first farther and then faster and then higher. Yeah, hills. Over and over again. Now those are my Tuesday nights with Team RWB! Riding with Team RWB led me on a journey towards getting healthier and getting stronger. It gave me so much, I wanted to give back.

In 2014, Team RWB members carried an American flag across the country to raise awareness about how the organization empowers veterans through physical and social activity. Last year, they did it again—and thanks to my Team RWB friends, I got to be a small, 60-mile part of the second Old Glory Relay. This year, I wanted to go bigger. 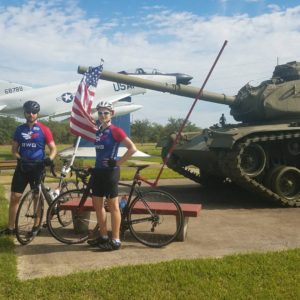 Fortunately, ScoutComms knows how to go big. When the third Old Glory Relay route was announced, the closest biking leg was in Texas. And 134 miles long. (What? We took an extra-scenic route.) A two-day drive there? A double metric century of riding? No big deal. From the very beginning, ScoutComms was ready to support this crazy idea. I was also fortunate enough to have another Old Glory veteran (and Army veteran and, perhaps most importantly, Syracuse Alum) Shawn join the journey. Not only did Shawn end up riding his first ever century during the relay, he also managed to put up with me for four days in a van.

During 136 miles of mind-numbingly straight and leg-numbingly flat roads, you have a chance to see a lot of the country you otherwise never would. While carrying the flag on our bikes, we got stopped by a gentleman who wanted to share his own story about how he helps inspire troops and veterans through service. We passed a cyclist going the opposite direction who turned around and caught up to us to find out more about Team RWB. Jacob is just a kid, he’s 16, and a birth defect with a tough choice, but he opted to have his left leg amputated. Now, he’s a Team USA junior national champion—not just among paracyclists but among all young athletes. These are the stories you learn and people you meet when you go outside of your comfort zone, when you challenge yourself to do hard things. These are the ways Team RWB empowers not just veterans, but also civilians like me, to be leaders and build communities. At ScoutComms, we’re lucky to have a work culture that encourages employees to get involved in organizations like Team RWB that share our mission to make a real, tangible difference in the lives of veterans and military families.