On Saturday at 3 PM EST, the weather in South Philly is predicted to be a chilly 39 degrees with a 43% chance of rain. Perfect conditions for an epic football game. But predicting the game-day temperature outcome isn’t the analysis Army or Navy fans are looking for ahead of the season’s biggest gridiron contest.

There are a lot of different datasets one could analyze ahead of the Army-Navy game, but as a communications firm at our core, we wanted to see which branch is winning the social media game. Recently, Army and Navy public affairs have created more and more buzz around the game with attempts to out-do each other on social media through spirit videos featuring everything from Star Wars references to, well, a lot of goats. As head of the data-driven market research arm of ScoutComms, Scout Insight, I wanted to use some of the same tools we use every day for clients to examine how our community is united (or divided) this time of year.

In 2013, eons ago in internetlandia, Navy fans slightly edged out Army fans in terms of search interest (though the team handily demolished any ideas of “Beat Navy”. The Google Trends graph below shows that beginning in 2014, Army fans became a little more vocal, even hopeful, you might say. Search interest in “Beat Navy” was on the rise. Alas, so were Navy touchdowns. 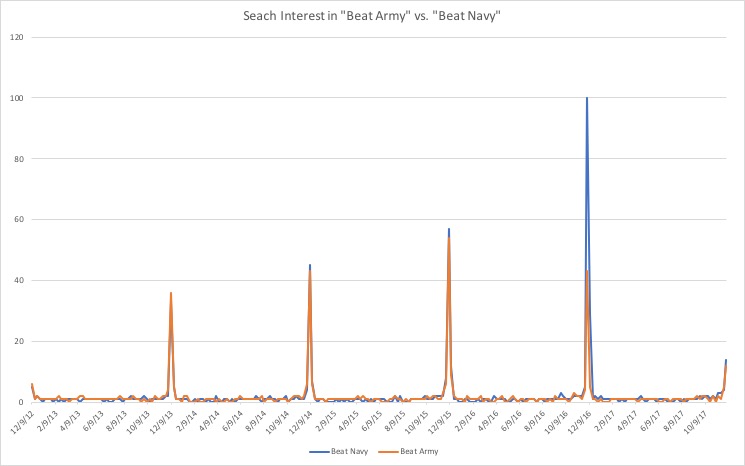 Of course, 2016 was a streak-breaking year for Army football and judging by the volume of “Beat Navy” queries, Army fans were not shy about gloating. Heading into the ’17 match-up, in terms of Google search interest, the teams are neck and neck, though Army has a slight advantage. 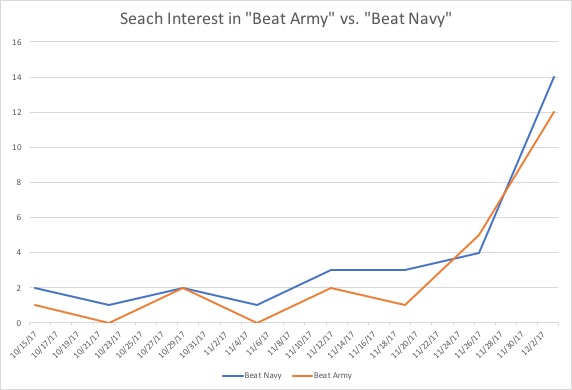 Utilizing Sprout Social, our analysis of how the Army-Navy rivalry is playing out on Twitter can get a bit more granular.

Over the last month, usage of #GoArmy or #BeatNavy has outpaced #GoNavy or #BeatArmy. Except for November 27, even peaks in pro-Navy propaganda have been overshadowed by larger peaks of pro-Army fervor. 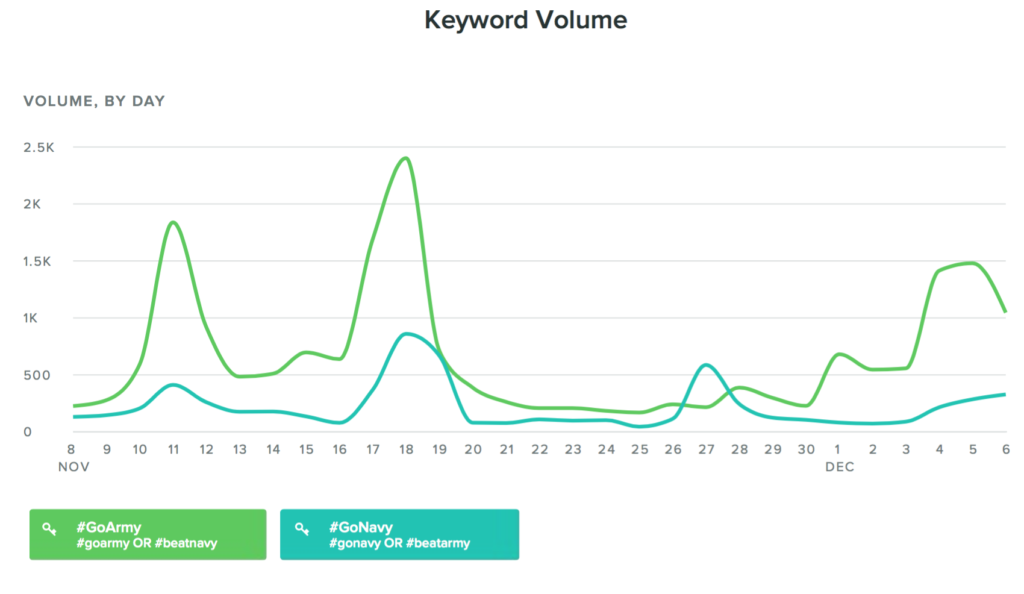 How did Navy turn the tide on November 27th? By unveiling its uniform for the game, with a Blue Angels theme that surely won’t irk the service’s hundreds of thousands of non-aviators.

But, a week later, the Army released its uniform for the game, which is inspired by the 10th Mountain Division and features a skiing panda commando.

So, you can see where this is going. The Army’s uniform helped drive nearly three times the number of Tweets the Navy garnered for its Danger Zone-less duds.

The day after releasing images of its uniform, Army Chief of Staff Gen. Mark Milley followed up by posting a joint spirit video, filmed with Chief of Naval Operations Adm. John Richardson. With more than 550 Retweets (the CNO’s own Tweet of the video has only 77) of the video, Milley and the Army managed to give #GoArmy/#BeatNavy a coveted two-day social media peak. 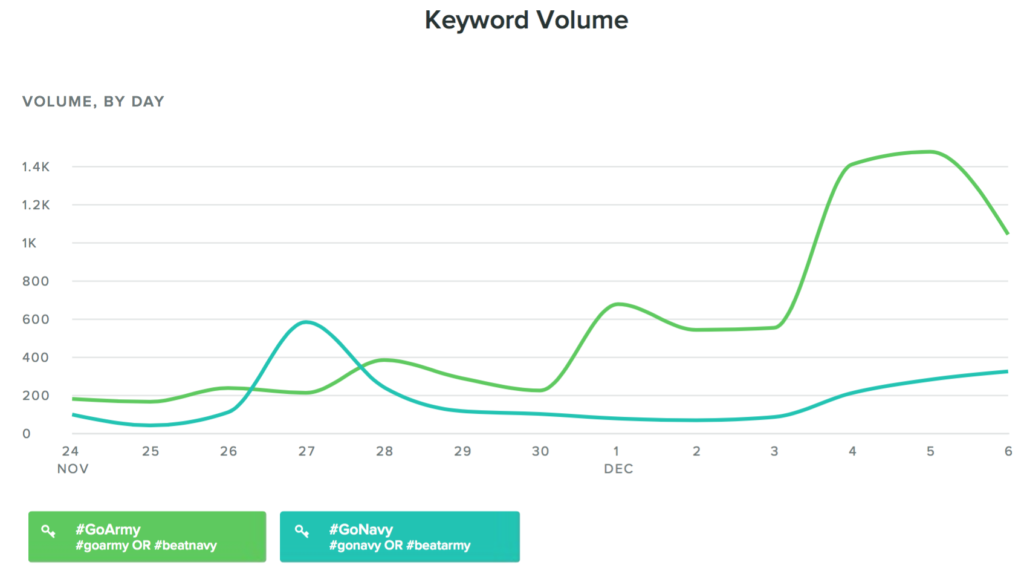 It’s not all bad news for Navy fans on social media, though. What goes up must come back down. Over the last week, despite Army Tweets crushing the Navy in volume, the Navy has a much stronger growth trend heading into the weekend. So don’t count out the crafty sailors—on Twitter or on the field.

“But Lauren,” I hear you feverishly typing. “The Army is a larger branch than the Navy. Of course they can outnumber them in Twitter warfare.”

According to the Pentagon’s latest active duty strength numbers, there were 476,167 soldiers as of October 31, 2017. There were 507,651 sailors and Marines (you’re Department of the Navy, deal with it.) Admittedly, Army Guardsmen and Reservists outnumbered Navy and Marine Corps Reservists by 437,413 people, but, you know… #GoArmy.*

Lauren Jenkins is a Vice President and Managing Director of Scout Insight at ScoutComms.

*ScoutComms Vice President Brian Wagner is a Navy Reservist currently deployed to Afghanistan so we should probably be a little less biased about this whole rivalry thing. Thank you for your service, Brian! #BeatNavy