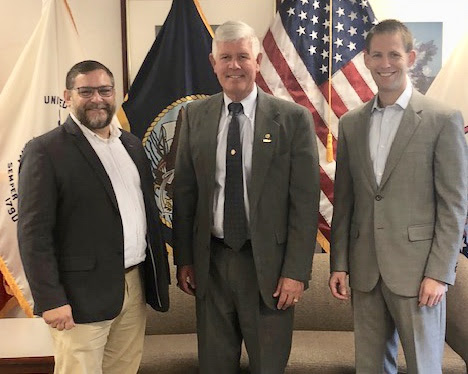 It’s been a challenging week with a rash of suicides on VA campuses around the country highlighting the ongoing battle to reduce veterans suicide. It is a challenging task normally but even more as VA approaches the deadline for expanding community care under the MISSION act in June and a national shortage of mental health professionals continues. We’ve got some perspective in our analysis below. But, we’ve also got some amazing news at ScoutComms as the Acting Chief of Information for the U.S. Navy announced that our own Brian Wagner was named the Reserve Junior Public Affairs Officer of the Year in the 2018 Thompson-Ravitz (T-R) Awards for Excellence in Navy Public Affairs. This is a prestigious honor and demonstrates how hard Brian works to serve not just our clients but the nation as well as a Naval Reserve Officer. Congratulations, Brian…now get back to work. – Fred

There is a lot of content to unpack from Leo Shane’s lengthy interview with VA Secretary Robert Wilkie. It is a dense and substantive conversation that touches on a number of key developments and controversies that have divided Congress and angered VSOs. This is one of those few times where I’ll spare you my opinion and just tell you to watch the interview and read the accompanying article. It is clear that Wilkie takes his mandate to serve veterans seriously, and is influenced by his family history. It’s also clear that he sees himself as doing nothing more than the job he was picked to do, which is to run the VA and oversee the implementation of the Mission Act. In response to outside criticism of the VA’s increasing reliance on community care, Wilkie’s primary response is that he is only executing the direction provided to him by Congress. He believes that the turbulence of the last two years is largely in the past, and that the VA is positioned on the path to success. With that in mind, the biggest question that Congress and the VA will be grappling with in years to come is not necessarily if they’ve been too permissive in allowing veterans to access outside providers, but whether Congress is willing to continue increasing VA funding to sustain internal resources while funding higher community care costs. If the trade-off negatively impacts VA facilities and providers—who have expertise and experience in treating veterans that is not necessarily replicated in the private sector—Congress and the VA are going to have to answer to VSOs that are already wary of these rapid changes and ballooning costs. In closing, I think Leo and Secretary Wilkie have the same barber. – Brian Wagner, COO of ScoutComms

Suicide remains a scourge for the veteran community that is defying all attempts at reducing it substantially and this week has highlighted the difficulty of defining the issue. Two veterans killed themselves in separate incidents at Department of Veterans Affairs facilities in Georgia over the weekend. Then another veteran shot himself in the waiting room of the Austin VA Clinic on Tuesday. That’s three incidents in five days and the sixth just this year on VA property. What little info we know about these incidents show the complexity of the problem; one of the dead in Georgia was 68 years old and not a “young veteran” as is often portrayed as the demographic most impacted by suicide. The issue spans all aspects of the community, young and old, combat veterans and non-combat veterans alike. The incidents at VA centers often seem to center on a lack of readily available mental health care treatment for the veterans who end their lives. It truly feels like in the end we need more professional mental health care professionals to meet the growing demands in our society. These latest incidents prompted a call from House Veterans Affairs Committee Chairman Rep. Mark Takano to call for a hearing later this month to discuss with the VA these latest incidents and efforts to address this growing wave. In the end we must all watch out for each other. If you know someone in crisis please reach out and offer them resources like the National Veteran Suicide Hotline at 1-800-273-8255 or our client Vets4Warriors at 1-855-838-8255 before an issue becomes a crisis. -Fred Wellman, Founder and CEO of ScoutComms

VA leaders against adding a fourth administration to the department
Stars and Stripes, Nikki Wentling (@NikkiWentling)

A bipartisan effort to create a separate administration within the Department of Veterans Affairs, which will focus on veteran education and employment, is being met with backlash from some senior level employees at VA. Margarita Devlin, the principal deputy undersecretary for benefits, noted the “interconnectivity between all of the programs” and emphasized the importance of those connections. However, supporters of the change maintain that due to its focus on distributing disability benefits, VA has not given proper attention to economic opportunity programs.

A Wisconsin law, called the Corey Adams Searchlight Act, puts out a “Green Alert” for veterans who are missing and thought to be suicidal. The Green Alert works similar to an AMBER alert, with details of the individual’s appearance and vehicle pushed out to the public. With a bill to support Green Alert nationally going through Congress, people are speaking up on both sides of the issue, trying to find a balance between safety and privacy.

The Congressman Who Turned the VA into a Lobbying Free-For-All
Politico, Jasper Craven (@Jasper_Craven)

Now outside of government, Jeff Miller, former chairman of the House Veterans’ Affairs Committee, has become a major lobbying force around the Department of Veterans Affairs, representing a growing number of corporate interests. His lobbying work puts him at the forefront of a steadily growing trend of companies spending time and money lobbying the VA, which used to be a relatively low priority for lobbying organizations. Now that Democrats are the majority on Miller’s old committee, it is expected that they will push back against his legacy as chairman and the current interests of some of his current clients.

Get out of the house with these free tickets to outdoor events for veterans and their families
Task and Purpose, Veterans Tickets Foundation (@VetTix)

Looking to get out of your house this Spring? Veteran Tickets Foundation (Vet Tix), a national nonprofit which distributes free event tickets to all currently serving military, including Guard and Reserve, veterans of all eras, military families and caregivers, has a great list of events for you to attend. Take a look at a few upcoming events, and go to www.vettix.org to find more.

Client Vets4Warriors’ Director, Maj. Gen. (Ret.) Mark Graham spoke at an event in Fort Stewart, Georgia on Wednesday—sharing the story of his youngest son committing suicide and then seven months later, his other son was killed in action by an IED in Iraq. Vets4Warriors is a 24/7, confidential peer support and resource connection network for anyone in the veteran and military community, whether it’s for mental health care, finances, family issues or more.

Congratulations to Tara Copp (@TaraCopp), who is joining the McClatchy Washington Bureau as their National Military/Veterans Affairs reporter.

Nikki Wentling (@nikkiwentling) is moving within Stars and Stripes to become the new national military reporter.