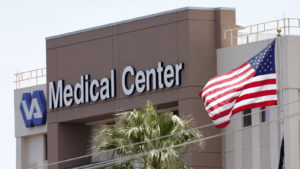 It was another fascinating week of controversy and online mayhem unfolding in the U.S. as the second episode of Game of Thrones focused on closing out character arcs and bringing them all together at Winterfell with no action whatsoever. Also, some political stuff happened –  the VA is wrestling with suicides on its campuses, promising developments for diagnosing PTSD out of NYU and our client, The Home Depot Foundation, keeps supporting veterans in need of home improvements. Check it out! Tell your friends! Call us to help accomplish your mission! – Fred

VA Won’t Ramp Up Security After Rash of Suicides on Premises. Here’s Why.
Military.com, Richard Sisk

I recommend reading Sisk’s lengthy article in its entirety, which covers far more than just VA security measures, and touches on various points related to the challenges in understanding and preventing veteran suicide. The VA is making the right decision by not overreacting to the VA campus suicides by turning the facilities into fortresses, but one has to wonder whether that commitment to promoting an open and inviting environment for veteran patients will endure if a suicidal veteran accidentally or intentionally kills others in the course of his or her attempt. If a single murder-suicide occurs on a VA campus, will that change everything? And if so, what is the proper balance between providing security and providing healthcare in a setting that doesn’t resemble a minimum-security prison? Sisk and Dr. Keita Franklin, the VA’s National Director of Suicide Prevention, also hit on the broader problem—a majority of veterans who die by suicide are not being seen or treated at any VA facility, and thus are out of the direct reach of the VA. Generating VA awareness of and connections to as many at-risk veterans as possible will be a major challenge, but is one of the most tangible problems to be solved in order to reduce the veteran suicide rate. -Brian Wagner, COO of ScoutComms

Finding a biomarker or physical indicator of Post Traumatic Stress Disorder has been a holy grail like item sought by the Department of Defense and VA for over a decade. With an increasing number of service members and veterans seeking care and benefits claims for the issue it has frustrated leaders and medical professionals that cognitive therapy and questionnaires remain the only way to diagnose the issue. Research published in the journal Depression and Anxiety shows a team of researchers at New York University School of Medicine, working with SRI International, the nonprofit research institute that developed the smartphone assistant Siri, has created an algorithm that can analyze patient interviews, sort through tens of thousands of variables in their speech and identify minute auditory markers of PTSD that are otherwise imperceptible to the human ear, then make a diagnosis. The technique narrowed down over 40,000 speech patterns and was successful in predicting PTSD 89% of the time. With wide use the technique could dramatically improve treatment and also reduce accusations of fakery for those seeking disability claims. While still far from deployment it is an important milestone towards an elusive goal. -Fred Wellman, CEO and Founder of ScoutComms

New changes are emerging to the Pentagon’s program for transitioning troops, where service members must complete the requirements no later than one year before retirement or the end of their enlistment. These new changes include an initial counseling session with an adviser, an eight-hour pre-separation training and the usual five-day TAP, which will be effective as of October 1. The Department of Defense recommends that those retiring should begin preparing for the training two years out.

Trump’s tax cut was a disaster for some Gold Star families, but it’s a symptom of a larger problem
Task & Purpose, James Clark, @JamesWClark

Due to Trump’s tax cut changes to the “Kiddie Tax,” military widows and widowers who put their benefits in their child’s name are seeing a significant spike in their taxes this year, resulting in them having to budget more throughout the year. To receive all of the benefits they have earned, surviving spouses have had to give their benefits to their children. TAPS’ deputy director of policy and legislation, Ashlynne Haycock, said, “If we end the offset, those benefits will be reassigned back to the spouses, so they’ll get all of the benefits they have earned, and we won’t have this tax issue going forward.”

In February, U.S. District Judge Gray Miller ruled that the male-only military draft was unconstitutional because it discriminates based on sex. The ruling was made without forcing the Selective Service System to make any changes. There is now an ongoing court case to expand the ruling to require that the Selective Service System take registrations from both men and women, but the Trump administration is appealing the ruling.

Are the schools that get the most GI Bill money spending the least on teaching?
Military Times, Joshua Axelrod (@jaxel222)

In a recent study of 4,600 higher-education institutions, conducted by Veterans Education Success (VES), it was found that some schools receiving the most Post-9/11 GI Bill money spend the least amount on educating students. Carrie Wofford, VES President, asked, “Is it appropriate for colleges to charge taxpayers for GI Bill funds but then divert those funds away from veterans’ actual education? And does Congress owe it to veterans and taxpayers to more carefully guard veterans’ earned benefits?

No Veteran Left Behind: American Legion Steps in to Help
CBS 46, Bobeth Yates

Our long time client The Home Depot Foundation continues their commitment to veterans toward their half a billion dollar donation goal with support to American Legion Post 516 in Henry County, Georgia. The donation is for materials to assist local veterans who need renovations made to their homes, including air conditioning, plumbing and wiring.