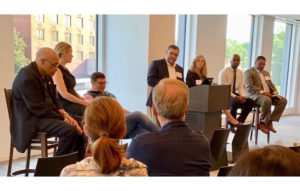 From baby sharks to making sure military spouses can keep their professional licenses, there is a lot going on in the military and veterans worlds this week. We focus on two less positive stories surrounding citizenship denial for immigrants who serve the nation and a loophole in military laws that is allowing convicted rapists to be set free over an unrecognized statute of limitations. So, you’ll laugh, you’ll cry…you’ll probably want to break things…all in this week’s ScoutReport. Tell your friends. Share it with your colleagues. Get people to subscribe…you know how much we love positive reinforcement here at ScoutComms! – Fred

Immigrant soldiers now denied US citizenship at higher rate than civilians
McClatchy DC, Tara Copp (@taracopp)
Long time defense journalist Tara Copp has settled at McClatchy DC and is out with a shocking story that shows new data from U.S. Citizenship and Immigration Services that reveals foreign born military service members are being denied citizenship at a higher rate than civilian aliens seeking the same. Even more concerning is that the overall number of military members even applying for citizenship has plummeted under the Trump Administration. The U.S. military has a long history dating back to the Revolution of military service serving as a fast track to citizenship for immigrants who want to support their new nation. They often provide invaluable foriegn language skills and cultural understanding that is incomparable for troops deployed overseas. That entire path seems to be drying up as the Administration broadly makes immigration harder and harder, not just for illegals as they promised, but even for much needed talented legal immigrants. A program designed to specifically recruit foriegn language speaker aliens for service was all but killed after Trump took office. Now this reporting showing the difficulty of those who want to serve our nation being able to become citizens comes at the same time new research shows that approximately 71% of American youths can’t even qualify to join the all-volunteer military. This is all unsustainable practices driven by politics that will undermine the military and our national security. The government needs to do better and take care of those who have the courage to volunteer to serve. – Fred Wellman, CEO and Founder of ScoutComms

Congressman fights appeals court ruling that resulted in military releasing convicted rapists
ConnectingVets.com, Eric Dehm (@ericdehm)
There is probably not a more infuriating story out there this week than the discovery of the outrageous ramifications of an appeals court ruling that literally hundreds of sexual assault cases are being tossed out. It is all due to a U.S. Court of Appeals for the Armed Forces (CAAF) ruling in 2018 that decided a 5-year statute of limitations should be imposed on rape charges and other crimes, including child sexual, abuse that occurred in a window in the 90’s due to a strange loophole in the laws. The decision was retroactive and now means that service members convicted of heinous crimes are being set free, their records cleared and even having their veterans benefits restored retroactively. Air Force and Army veteran Harmony Hall was brutally beaten and raped by a senior Non-Commissioned Officer in her early training and fought to have her case heard for over a decade before succeeding. Now her attacker has been released and actually lives on an Air Force Base. She took her anger to her Congressman, and fellow Army veteran, Brian Mast. He has now created what he calls ‘Harmony’s Law’ to close this loophole and ensure that more cases aren’t thrown out and justice denied. Mast hopes more lawmakers will sign on and quickly pass the Act and we agree. This couldn’t come at a worse time as many victims of sexual assault in the military are finally coming forward to seek justice only to see it denied them again. – Fred Wellman, CEO and Founder of ScoutComms

How a new plan aims to keep military spouses working
Military Times, Leo Shane III (@LeoShane)
The new bipartisan Portable Certification of Spouses Act was introduced last week to establish universal professional licensing requirements to help reduce barriers for military spouse employment. The legislation would provide $10 million to create these universal standards, as well as allow spouses to keep state residency after they move so that business licenses would not need to comply with different state laws after each move.

“Baby Shark” becomes cadence for Fort Gordon battalion
The Augusta Chronicle, Sarah LeBlanc (@sarahkayleblanc)
Sgt. 1st Class Lincoln Crisler thought it would be fun to have his soldiers march to the popular children’s song “Baby Shark” and decided to have it recorded. The video has now gone viral with over 4 million views and 82,000 shares. Crisler has been known to switch up his cadence choice, and “Baby Shark” made many of his soldiers start dancing to the tune. Pvt. 2nd Class Dylan Bazzy stated that the song helped them relax and unwind.

In First, Pentagon to Release Information on Military Dependent Suicides
Military.com, Patricia Kime (@patriciakime)
The Department of Defense will be publishing the Annual Suicide Report this summer, a new reporton active-duty military and military family suicides. Defense Suicide Prevention Officer Director Karin Orvis said that the report will allow the DoD to “monitor trends in suicide over time and identify risk factors for protective factors for suicide.”

How PTSD headlines lead to mirage of the ‘broken veteran’
The Christian Science Monitor, Martin Kuz (@MartinKuz)
News coverage of violent acts committed by Iraq and Afghanistan war veterans have emphasized the stereotype of the ‘broken veteran’ in relation to struggling with PTSD. This stereotype further creates misconceptions that lead to a deep lack of understanding of the PTSD diagnosis and promotes the military and civilian divide.