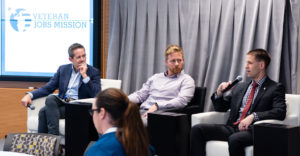 It has been a crazy week in a host of ways, including a bunch of new veteran-focused actions passing the House of Representatives and an explosion on social media about the President pardoning convicted and accused war criminals over Memorial Day weekend. We hit the high points below. But, let’s take a moment to remember what this weekend is truly about. We honor those who fell in service to our nation during its long history. Many of you who are loyal subscribers have lost friends and family in uniform and we truly appreciate the sacrifices they made and honor their service. Thank you for being part of our family and thank you for sharing our work with your friends and coworkers. – Fred

Military social media circles exploded over the weekend with the New York Times story that President Trump has asked for pardon paperwork to be prepared for several service members, veterans and a former Blackwater contractor all accused of various war crimes in Iraq and Afghanistan. Especially infuriating to many was the idea of issuing the pardons on Memorial Day weekend when we pause to remember those we lost in service to the nation. The announcement has caused a rare outpouring of criticism from retired flag officers and junior current service members along with veterans of the Post-9/11 era. The effort is being spearheaded by Fox News pundits, the accused’s family members and a mixture of conservative “support the troops” voices. The entire idea is outrageous and undermines the good order and discipline of the military for years. By walking away from pursuing those who break the laws of war we are greenlighting our enemies to do the same. We are endangering our troops overseas and telling them that they don’t have to follow the rules of engagement because as long as they get the attention of the right friends of the President all will be wiped away. This must not happen. Justice needs to take its course and the rules that make the U.S. military the professional force it remains must be enforced and respected. – Fred Wellman, CEO and Founder of ScoutComms

This Memorial Day, veterans take on another threat: rising cancer deaths in the ranks

According to the small sample size of data represented by the Tragedy Assistance Program for Survivors (TAPS) membership, military families may be coping with rising rates of cancer killing service members. While there is currently no conclusive large-scale data set to validate a trend being seen at the membership level by TAPS, there are enough concerns about possible environmental factors—such as burn pits in Afghanistan, depleted uranium in tank armor, and contaminated water at military bases in the U.S.—for veterans groups like TAPS and Wounded Warrior Project to raise alarms not just about individual types of environmental threats but about the impact collective exposure may be having on the health and lives of service members and their families. TAPS has gone so far as to predict that by 2020, cancer and other illnesses will be a larger driver for its membership than the current suicide epidemic, which kills approximately 20 veterans and service members each day. Copp’s article notes that while the government does have access to vast amounts of data about service members, the data is unwieldy for researchers to access and is closed to individual families. It appears that there are two keys to addressing this situation. First, to continue to examine possible environmental causes of cancer to better understand where causation can be found, and second, to continue to build and improve the usability of existing DoD and VA databases so that researchers can identify trends that will either validate or assuage the fears of organizations like TAPS, which worry about a cancer epidemic afflicting increasingly young service members. Military service is dangerous, and people join knowing the risks, but those risks are generally not assumed to include cancer. If TAPS is right, the status quo is unacceptable. – Brian Wagner, COO of ScoutComms

Only 55% of Americans Know Why the Nation Marks Memorial Day, Survey Finds

In a survey conducted in April among 2,025 respondents, results showed that 55% could correctly describe Memorial Day, 45% participated in a form of commemoration on Memorial day, including thanking a veteran, and that older adults are more likely to observe and describe the day correctly. The survey, commissioned by the University of Phoenix, followed allegations that the university violated rules against seeking to gain preferential access to potential students from the military.

The Supreme Court rejected the petition of Walter Daniel, husband of Navy Lt. Rebekah “Moani” Daniel who died due to complications during birth. Daniel sought to challenge precedent set since 1950 – the Feres Doctrine, which has barred service members from suing the federal government regarding injuries sustained relating to their military service.

LISTEN: 3 combat veterans reveal survival stories on ‘To War and Back’

Army veteran Boone Cutler and Marine Corps veterans Scott Huesing and Kirstie Ennis shared their stories on the podcast “To War and Back,” with host Phil Briggs, journalist and Navy veteran. Each guest described their experiences in war and the transition returning home. Take a listen.

There are new policies in place that will help lighten the financial burden for Army and Air Force spouses, specifically the need to renew licenses each time they move to a new duty station. Though it is not limited to one move, reimbursement for each move cannot exceed $500. With the Army and the Air Force implementing these changes currently, it is expected that the Marine Corps and the Navy will soon follow suit.

Next week, client National Coalition for Homeless Veterans (NCHV) will be hosting their annual conference in Washington, D.C. The theme for #NCHV19 is ‘Driven by Data’ and will host over 700 service providers seeking resources and technical assistance for homeless veterans in their local areas.